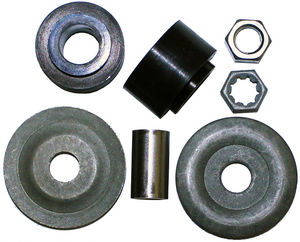 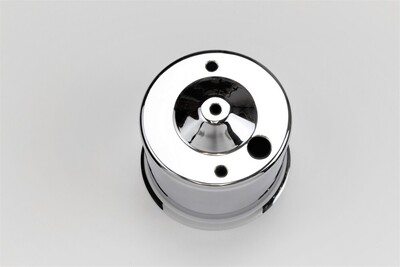 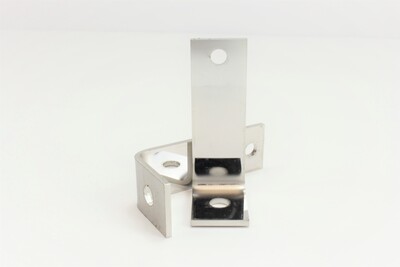 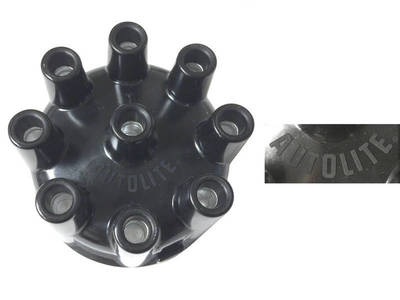 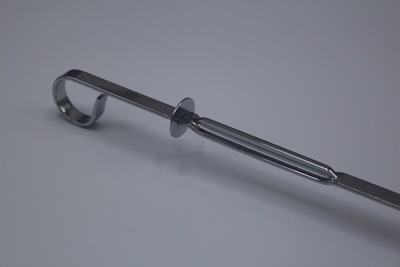 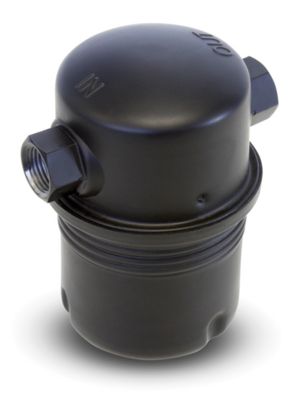 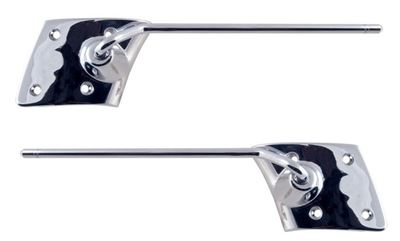 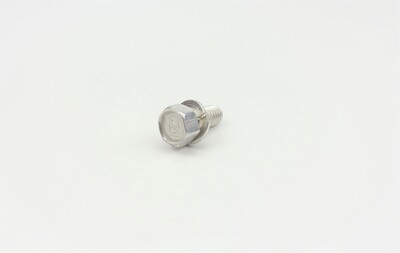 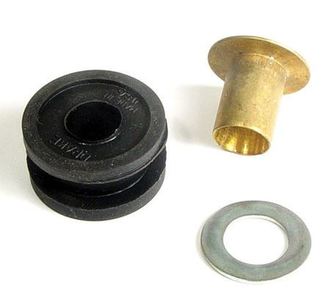 The 1957 models retained a single-headlight front end like their predecessors, but were unmistakable with their long flanks and tailfins. A plethora of trim lines was introduced, starting with the base "Custom", "Custom 300", "Fairlane", and top-line "Fairlane 500". The two Custom lines used a 116 in (2946 mm) wheelbase, while the Fairlanes had 118 in (2997 mm) between the wheels. A new car/pickup truck hybrid based on the short-wheelbase chassis was also introduced, the Ranchero.
The 223 CID (3.7 L) OHV Straight-6 continued, now with 144 hp. The V8 lineup included a 272 CID (4.5 L) Y-block making 190 hp, a 292 CID (4.8 L) Thunderbird version making 212 hp, a 312 cubic inch V8 making 245 HP and a fabulous supercharged 312 CID (5.1 L) Thunderbird Special making 300 hp, and designated "Police Interceptor" on the glove box. Two dual 4 barrel versions of the naturally aspirated (non-supercharged) 312 cubic inch V8 rated at 270 and 285 HP were available. The 270 HP version had the same cam as all the other V-8's but had vibration dampers on the valve springs. The 285 HP engine had a racing cam and was only available to NASCAR and possibly other racers. This option was dubbed "E code" and was available in all body types. It came standard with the deep-dish steering wheel. The radio had a transistorized audio output stage for the first time.4 There were lights for the generator and oil instead of gauges.5 The controls became recessed for more safety (the Lifeguard safety package was still available)
A new frame was used for the 1957 Fords. It moved to perimeter rails out, so that they would fully envelope the passengers.
In a survey of 1957 Fabulous Ford owners in the March, 1957 issue of Popular Mechanics, only 6.2% of owners ordered seat belts.
This model was very successful, being the best selling car in America, overtaking arch rival Chevrolet for the first time since 1935.

The line was freshened with a simulated hood scoop and dual-headlight front clip for 1958. The rectangular grille openings gave way to circles, and a simulated hood scoop was added. A new 3-speed Cruise-O-Matic automatic was optional along with the 2-speed Ford-O-Matic and manual transmission. Engines were also updated, with the 272 CID dropped, the 292 CID making 205 hp, and a new-generation 332 CID (5.4 L) FE V8 rated at 240 HP in 2 barrel form and 265 HP in 4 barrel "Interceptor" form. The new 352 cubic inch V8, also dubbed "Interceptor" and rated at 300 hp made its debut. Galaxie production was started in Lorain, Ohio at Ford's Lorain Assembly plant for 1958 and continued through 1959 with 102,869 Galaxies produced there. Air suspension became optional. The convertible version of a Fabulous Ford Fairlane 500, Ford Fairlane 500 Skyliner (also called Skyliner Retractable Convertible), had been sold for three years - 1957, 1958, and 1959. It was the most expensive vehicle offered by Ford. The 1958 Skyliner sold for $3,163 while the standard convertible sold for $2,650 and the sedan went for $2,055. A total of 14,713 units were produced in 1958. Ford Fairlane 500 Skyliner weighed 4,609-pounds.


View 1959 Ford Parts
The top-line spot for 1959 was the new Galaxie, positioned above the continued Fairlane 500. The Custom line was dropped, with Custom 300 the lowest rung on the ladder, and all 1959 Fords used the long 118 in (2997 mm) wheelbase. New for safety was fully padded armrests and rear door locks that were child proof. American prices ranged from the mid-1,000 to the low 3,000s.
This fabulous version was also assembled in Australia, beginning in late 1959. Local models were the luxurious Fairlane 500, the lower-priced Custom 300 (both sedans), as well as the Ranch Wagon. The Australian models were powered by the 332 cu in (5.4 L) "Thunderbird" engine, producing 204 hp.For 1960, the range was updated with the grille and trim from the 1959 Canadian Meteor.


View 1960 Ford Parts
The Fabulous Fords of the 1960's looked all-new with twin headlights riding in a scalloped-square front clip. The Fairlane was now the base model in the full-sized lineup, along with the Fairlane 500, Galaxie and range-topping Starliner. The Station Wagon Series continued with Ranch Wagon, Country Sedan and Country Squire models. The fabulous Starliner 2-door hardtop roofline was Ford's choice for NASCAR racing. The 1960 fullsize Fords abandoned the ostentatious ornamentation of the 1950s for a futuristic, sleek look. Round taillights were replaced by half-moon shaped taillights for 1960 only. There were tailfins still, but smaller ones - the focus of Ford's stylists abandoning, as did the rest of the industry, the aviation influences of the previous decade and instead capturing the new obsession - the Space Race. The Galaxie name was particularly appealing to this trend, it seems. Windshield wipers were extended to cover more of the windshield. Ford also introduced the center rear fuel door lid.


View 1961 Parts
The scalloped hood was gone for 1961, as the sheetmetal was revised for a cleaner look. This time, the tailfins were almost gone; replacing them, two giant circular taillights at each rear corner, glowing like an afterburner. Ford was definitely going with the space and science-fiction theme, and with successful results; this style of Galaxie Starliner still retained the fabulous roofline of the 60 and is widely regarded as a classic. A new 390 CID (6.4 L) FE V8 was added with a claimed 401 hp gross output in triple-two-barrel carburetor form. A trunk release button was optional


View 1962 Parts
With the Fabulous Ford Fairlane and Fairlane 500 names shifted to a new intermediate-sized model range for 1962, the full-size Ford lineup consisted of the Galaxie, new Galaxie 500 and Galaxie 500XL models and the Station Wagon Series. Also new was a 406 CID (6.7 L) version of Ford's FE mid-sized V8 rated at 405 hp. Bucket seats were everywhere in 1962 - sold as "The Lively Ones", the XL series added buckets to the Sunliner convertible and hardtop coupe. The slow-selling Starliner semi-hardtop coupe was cancelled, leaving Ford no choice than to compete in stock car racing with the Club Victoria, which had a formal roofline. Their top speed was lower than the 1961s because of the inferior aerodynamics. Trying to come up with a quick solution, Ford attempted to enter the Starlift, which was a Sunliner convertible with a removable roof with a curved roofline similar to the 1960-61 Starliner. NASCAR banned the Starlift from competition, and few if any were actually produced. It is said that the windows could not be rolled up on the Starlift when the top was on, as the windows were the stock Sunliner windows which did not fit the roofline.

1963 Ford Car
View 1963 Parts
Ford rolled into 1963 with a NASCAR-winning Galaxie and a fabulous 427 CID (7 L) FE V8 engine which was used in the Fabulous Ford GT40 which won the 24hrs of LeManns in 1966. This engine in passenger cars was available in a 410 hp or 425 hp. A fabulous new ford hardtop coupe body was added to the Galaxie range, and the base model became known as the 300.
The hardtop coupe sported a lower, fastback roofline and was added mid year to improve looks and make the big cars more competitive on the NASCAR tracks. This 63 1/2 model was called the "Sports Roof" hardtop.
Ford took the 427 CID (7.0 L) equipped Galaxie to the dragstrip in serious fashion beginning in 1963, building a number of lightweight cars just for that purpose. They featured fiberglass fenders, doors, trunklid and aluminum bumpers. Rated conservatively at 425 hp, this engine also featured in Carroll Shelby's final incarnation of the AC Cobra.
The Ranch Wagon name was transferred to the Ford Fairlane range for 1963, leaving only the Country Sedan and Country Squire models in the full-size Ford Station Wagon Series.

The final year of the 1960 full-size Fords was 1964, with the 300 base model again using the Custom name. The base Galaxie was now called "Custom 500." The Sports Roof was continued for all hardtop coupes. Interior trim was new, including new thin-shell bucket seats for all XL models. The instrument panel remained the same, except for the ignition switch, which was moved from left of the steering column, to the right. External styling was once again refreshed, with a more sculptured body that was supposed to reduce drag at high speeds, no doubt done for NASCAR.
Under the hood, the 427 CID (7.0 L) engine carried on the high performance duties. Ford again took the 427-equipped Galaxie to the racetracks in serious fashion in 1964, building a number of lightweight, fiberglass equipped cars just for drag racing. The 427 SOHC Cammer was build for NASCAR but NASCAR outlawed it and the Chrysler HEMI before it ever ran because the cars were going too fast. Connie Kalitta used the 427 SOHC Cammer in his AA fueled dragster and was the only person to win the national championship in all 3 associations NHRA, AHRA and IHRA. These competed with success not only in North America but also in the United Kingdom. Initial doubts as to their competitiveness in Britain were short-lived; despite their great size and weight compared to the opposition, the Ford 427 engine gave them a competitive power-to-weight ratio and the handling was better than might have been supposed. They were raced in Europe reasonably successfully.
Late in the year Ford introduced their new engine challenger, the SOHC 427 Cammer, Though it is not documented it is believed a few may have found their way onto the street. (This engine was only available to racers through the dealer network or from the manufacturer, none were ever factory installed) Rated at over 600 hp.
The 1964s represent a high point in early 1960s fabulous Ford quality, durability, and styling. They were not only enormously popular, but proved to be so durable that many continued to run well past the 100,000 mile mark without a major overhaul. Holman & Moody continued to supply high-performance equipment for the big '64 Fords, giving them wins at NASCAR.